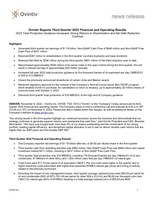 "Our strong results in the third quarter highlight our continued execution across the business and demonstrate that our strategy continues to generate superior returns and substantial free cash flow," said Ovintiv President and CEO, Brendan McCracken. "We have now bought back more than 5% of our shares outstanding and the combination of our strong portfolio, leading capital efficiency, and disciplined capital allocation is set to see us deliver durable cash returns that are higher than our E&P peers and the broader S&P 500."

2022 Guidance
Ovintiv's full year capital investment is expected to total approximately $1.8 billion, at the high end of the previous capital guidance range. Total BOE volumes have increased to 505 to 515 MBOE/d, reflecting strong new well production performance from the Montney. Fourth quarter and full year 2022 oil and condensate production volumes have been adjusted to include the expected impact of production clean-up on returning oil volumes following the resolution of line pressure issues in the Anadarko and the decision to delay the completion of certain wells across the U.S. assets to preserve capital discipline. Full year total cost guidance remains unchanged. The guidance assumes commodity prices of $80/bbl for WTI oil and $7/Mcf for NYMEX natural gas for the fourth quarter.

Returns to Shareholders
In July 2022, Ovintiv increased its returns to shareholders from 25% to 50% of the previous quarter's Non-GAAP Free Cash Flow after base dividends through share buybacks.

Share Buyback Program
During the third quarter, Ovintiv purchased for cancellation, approximately 6.7 million shares of common stock outstanding for a total consideration of approximately $325 million. As of September 30, 2022, the Company's 2022 share repurchases totaled approximately 11.2 million shares of common stock at an average price of $47.55 per share, for a total of $531 million. Ovintiv has allocated approximately $188 million, or 50% of third quarter non-GAAP Free Cash Flow after base dividends, to share repurchases in the fourth quarter.

In September, the Company received regulatory approval for the renewal of its NCIB share repurchase program. This enables the Company to purchase, for cancellation or return to treasury, up to approximately 25 million shares of common stock (10% of common shares outstanding) until October 2, 2023. Using a November 4, 2022, closing price of $53.41, and assuming the repurchase of 25 million shares, the 2023 NCIB program would have a cash outlay of approximately $1.3 billion. In the event the Company meets its share repurchase limitation under the NCIB, it has the option to pursue alternative methods to repurchase additional shares.

Continued Focus on Balance Sheet Strength and Debt Reduction
Ovintiv remains committed to reducing Net Debt. At the end of the third quarter, Ovintiv's Net Debt was approximately $3.6 billion, down $991 million since the start of the year, and Net Debt to Adjusted EBITDA was 0.9 times.

As of September 30, 2022, the Company had $3.4 billion in total liquidity which included available credit facilities of $3.5 billion, available uncommitted demand lines of $296 million, and cash and cash equivalents of $18 million, net of outstanding commercial paper of $440 million.

Non-Core Asset Sales
In July 2022, Ovintiv announced it had reached agreements with two counterparties to sell portions of its assets located in the Uinta and Bakken basins. Both transactions closed during the third quarter. As of April 2022, the combined volumes from the divested assets totaled approximately 5.0 MBOE/d, including 4.9 Mbbls/d of oil and condensate.

For additional information, please refer to the third quarter 2022 Results Presentation at: https://investor.ovintiv.com/presentations-events.

Conference Call Information
A conference call and webcast to discuss the Company's third quarter results will be held at 8:00 a.m. MT (10:00 a.m. ET) on November 9, 2022. To participate in the call, please dial 888-664-6383 (toll-free in North America) or 416-764-8650 (international) approximately 15 minutes prior to the conference call. The live audio webcast of the conference call, including slides, supplemental information and financial statements, will be available on Ovintiv's website, www.ovintiv.com under Investors/Presentations and Events. The webcast will be archived for approximately 90 days.

Important information
Unless otherwise noted, Ovintiv reports in U.S. dollars and production, sales and reserves estimates are reported on an after-royalties basis. Unless otherwise specified or the context otherwise requires, references to Ovintiv or to the Company includes reference to subsidiaries of and partnership interests held by Ovintiv Inc. and its subsidiaries.

ADVISORY REGARDING OIL AND GAS INFORMATION – The conversion of natural gas volumes to barrels of oil equivalent (BOE) is on the basis of six thousand cubic feet to one barrel. BOE is based on a generic energy equivalency conversion method primarily applicable at the burner tip and does not represent economic value equivalency at the wellhead. Readers are cautioned that BOE may be misleading, particularly if used in isolation. The term "liquids" is used to represent oil, NGLs and condensate. The term "condensate" refers to plant condensate.

ADVISORY REGARDING FORWARD-LOOKING STATEMENTS – This news release contains forward-looking statements or information (collectively, "forward-looking statements") within the meaning of applicable securities legislation, including Section 27A of the Securities Act of 1933, as amended, and Section 21E of the Securities Exchange Act of 1934, as amended.  All statements, except for statements of historical fact, that relate to the anticipated future activities, plans, strategies, objectives or expectations of the Company are forward-looking statements.  When used in this news release, the use of words and phrases including "anticipates," "believes," "continue," "could," "estimates," "expects," "focused on," "forecast," "guidance," "intends," "maintain," "may," "opportunities," "outlook," "plans," "potential," "strategy," "targets," "will," "would" and other similar terminology is intended to identify forward-looking statements, although not all forward-looking statements contain such identifying words or phrases.  Readers are cautioned against unduly relying on forward-looking statements which are based on current expectations and, by their nature, involve numerous assumptions that are subject to both known and unknown risks and uncertainties (many of which are beyond our control) that may cause such statements not to occur, or actual results to differ materially and/or adversely from those expressed or implied.  These assumptions include, without limitation: future commodity prices and basis differentials; the ability of the Company to access credit facilities and capital markets;  future foreign exchange rates; the Company's ability to capture and maintain gains in productivity and efficiency; data contained in key modeling statistics; availability of attractive commodity or financial hedges; benefits from technology and innovation; assumed tax, royalty and regulatory regimes; expectations and projections made in light of the Company's historical experience; and the other assumptions contained herein.  Risks and uncertainties that may affect the Company's financial or operating performance include: market and commodity price volatility; uncertainties, costs and risks involved in our operations, including hazards and risks incidental to both the drilling and completion of wells and the production, transportation, marketing and sale of oil, NGL and natural gas; availability of equipment, services, resources and personnel required to perform the Company's operating activities; service or material cost inflation; our ability to generate sufficient cash flow to meet our obligations and reduce debt; the impact of a pandemic, epidemic or other widespread outbreak of an infectious disease (such as the ongoing COVID-19 pandemic) on commodity prices and the Company's operations; our ability to secure adequate transportation and storage for oil, NGL and natural gas; interruptions to oil, NGL and natural gas production; discretion of the Company's Board of Directors to declare and pay dividends; the timing and costs associated with drilling and completing wells; business interruption, property and casualty losses (including weather related losses) and the extent to which insurance covers any such losses; counterparty and credit risk; the actions of members of OPEC and other state-controlled oil companies with respect to oil, NGLs and natural gas production; the impact of changes in our credit rating and access to liquidity; changes in political or economic conditions in the United States and Canada; risks associated with technology, including electronic, cyber and physical security breaches; changes in royalty, tax, environmental, GHG, carbon, accounting and other laws or regulations or the interpretations thereof; our ability to timely obtain environmental or other necessary government permits or approvals; risks associated with existing and potential lawsuits and regulatory actions; risks related to the purported causes and impact of climate change; the impact of disputes arising with our partners; the Company's ability to acquire or find additional oil and natural gas reserves; imprecision of oil and natural gas reserves estimates and estimates of recoverable quantities; risks associated with past and future acquisitions or divestitures; our ability to repurchase the Company's outstanding shares of common stock; the existence of alternative uses for the Company's cash resources which may be superior to the payment of dividends or share repurchases; land, legal, regulatory and ownership complexities inherent in the U.S., Canada; failure to achieve or maintain our cost and efficiency initiatives; risks and uncertainties described in "Risk Factors" and "Management's Discussion and Analysis of Financial Condition and Results of Operations" sections of the Company's most recent Annual Report on Form 10-K and Quarterly Report on Form 10-Q; and other risks and uncertainties impacting the Company's business as described from time to time in the Company's filings with the SEC or Canadian securities regulators.