Ovintiv to Accelerate Doubling of Shareholder Returns; Announces Agreements to sell Portions of its Uinta and Bakken Assets for Approximately $250 Million 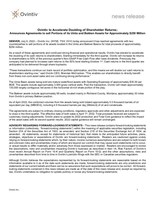 As a result of these agreements and continued strong financial and operational results, Ovintiv has elected to accelerate the doubling of its cash returns to shareholders. Starting immediately for the third quarter, Ovintiv will increase its returns to shareholders to 50% of the previous quarter's Non-GAAP Free Cash Flow after base dividends. Previously the company had planned to increase cash returns to the 50% level starting October 1st. Cash returns in the third quarter are anticipated to be delivered through share buybacks.

"These transactions continue our track record of portfolio optimization, and this means we will double our cash returns to shareholders starting now," said Ovintiv CEO, Brendan McCracken. "This enables our shareholders to directly benefit from these non-core asset sales and our continuing strong performance."

The Uinta Basin assets being sold are mature waterflood assets with Operating Expenses of approximately $35.00 per BOE. The assets include approximately 3,000 gross vertical wells. Post the transaction, Ovintiv will retain approximately 130,000 largely contiguous net acres in the horizontal oil-rich shale portion of the play.

The agreements are subject to ordinary closing conditions, regulatory approvals and other adjustments and are expected to close in the third quarter. The effective date of both sales is April 1st, 2022. Total proceeds received are subject to customary closing adjustments. Ovintiv plans to update its 2022 production and Total Cost guidance to reflect the impact of the asset sales with its second quarter results. 2022 capital guidance will remain unchanged.

ADVISORY REGARDING FORWARD-LOOKING STATEMENTS – This news release contains forward-looking statements or information (collectively, "forward-looking statements") within the meaning of applicable securities legislation, including Section 27A of the Securities Act of 1933, as amended, and Section 21E of the Securities Exchange Act of 1934, as amended.  All statements, except for statements of historical fact, that relate to the anticipated future activities, plans, strategies, objectives or expectations of Ovintiv are forward-looking statements.  Readers are cautioned against unduly relying on forward-looking statements which, by their nature, involve numerous assumptions and are subject to both known and unknown risks and uncertainties (many of which are beyond our control) that may cause such statements not to occur, or actual results to differ materially and/or adversely from those expressed or implied.  Readers are encouraged to review the assumptions, risks and uncertainties impacting Ovintiv's business as described in Item 1A. Risk Factors of Ovintiv's most recent Annual Report on Form 10-K and Quarterly Report on Form 10-Q; and the other assumptions, risks and uncertainties described from time to time in Ovintiv's periodic filings with the SEC or Canadian securities regulators.