DENVER, Sept. 28, 2021 /CNW/ - Ovintiv (NYSE: OVV) (TSX: OVV) today announced it is progressing its commitment to increase shareholder returns with the receipt of regulatory approvals for a share buy-back program. This action is consistent with the Company's capital allocation framework, which supports the goal of unlocking shareholder value by delivering on Ovintiv's strategic priorities of financial strength, increasing cash returns to shareholders, generating superior returns on capital investment, and driving ESG progress. 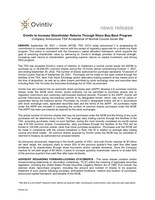 The TSX has accepted Ovintiv's notice of intention to implement a normal course issuer bid (NCIB) to purchase up to 26,048,261 common shares during the 12-month period commencing October 1, 2021, and ending September 30, 2022. The number of shares authorized for purchase represents 10 percent of Ovintiv's public float as of September 20, 2021.  Purchases will be made on the open market through the facilities of the TSX, New York Stock Exchange and/or alternative trading systems at the market price at the time of acquisition, as well as by other means permitted by stock exchange rules and securities laws including Rule 10b-18 under the Securities Exchange Act of 1934, as amended.

Ovintiv has also entered into an automatic share purchase plan (ASPP) allowing it to purchase common shares under the NCIB when Ovintiv would ordinarily not be permitted to purchase shares due to regulatory restrictions and customary self-imposed blackout periods. Pursuant to the ASPP, Ovintiv will provide instructions during non-blackout periods to its designated broker, which may not be varied or suspended during the blackout period. Purchases by Ovintiv's designated broker will be in accordance with stock exchange rules, applicable securities laws and the terms of the ASPP.  All purchases made under the ASPP are included in computing the number of common shares purchased under the NCIB. The ASPP has been pre-cleared as required by the stock exchanges.

The actual number of common shares that may be purchased under the NCIB and the timing of any such purchases will be determined by Ovintiv. The average daily trading volume through the facilities of the TSX, excluding purchases made on such facilities, during the most recently completed six-month period was 419,746 common shares. Consequently, daily purchases through the facilities of the TSX will be limited to 104,936 common shares, other than block purchase exceptions.  Purchases over the NYSE will be made in compliance with the volume limitations in Rule 10b-18 in relation to average daily trading volume and block trades.  All common shares acquired by Ovintiv under the NCIB may be cancelled or returned to treasury as authorized but unissued shares.

ADVISORY REGARDING FORWARD-LOOKING STATEMENTS - This news release contains certain forward-looking statements or information (collectively, "FLS") within the meaning of applicable securities legislation, including the United States Private Securities Litigation Reform Act of 1995. FLS include: the planned share repurchase program, including the amount and number of shares to be acquired, treatment of such shares following purchase, anticipated timeframe, method and location of purchases, announced capital framework; and benefits of the NCIB.

Readers are cautioned against unduly relying on FLS which, by their nature, involve numerous assumptions, risks and uncertainties that may cause such statements not to occur, or results to differ materially from those expressed or implied. These assumptions include: future commodity prices and differentials; foreign exchange rates; ability to access cash, credit facilities and shelf prospectuses; and expectations and projections made in light of, and generally consistent with, Ovintiv's historical experience and its perception of historical trends, including with respect to the pace of technological development, benefits achieved and general industry expectations.

Risks and uncertainties that may affect these business outcomes include: ability to generate sufficient cash flow to meet obligations and fund the NCIB; commodity price volatility; variability in the amount, number of shares, method, location and timing of purchases, if any, pursuant to the NCIB; fluctuations in currency and interest rates; and other risks and uncertainties impacting Ovintiv's business, as described in its most recent Annual Report on Form 10-K and as described from time to time in Ovintiv's other periodic filings as filed on EDGAR and SEDAR.

Although Ovintiv believes the expectations represented by such FLS are reasonable, there can be no assurance that such expectations will prove to be correct. Readers are cautioned that the assumptions, risks and uncertainties referenced above are not exhaustive. FLS are made as of the date of this news release and, except as required by law, Ovintiv undertakes no obligation to update publicly or revise any FLS. FLS contained in this news release are expressly qualified by these cautionary statements.

Further information on Ovintiv is available on the company's website, www.ovintiv.com, or by contacting: