Ovintiv Names George L. Pita to Board of Directors 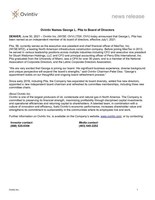 Pita, 59, currently serves as the executive vice president and chief financial officer of MasTec, Inc. (NYSE: MTZ), a leading North American infrastructure construction company. Before joining MasTec in 2013, he served in various leadership positions across multiple industries including CFO and executive vice president for Stuart Weitzman Holdings, LLC and CFO and principal accounting officer of Perry Ellis International, Inc. Pita graduated from the University of Miami, was a CPA for over 30 years, and is a member of the National Association of Corporate Directors, and the Latino Corporate Directors Association.

"We are very excited that George is joining our board. His significant business experience, diverse background and unique perspective will expand the board's strengths," said Ovintiv Chairman Peter Dea. "George's appointment builds on our thoughtful and ongoing board refreshment process."

Since early 2019, including Pita, the Company has expanded its board diversity, added five new directors, appointed a new independent board chairman and refreshed its committee memberships, including three new committee chairs.