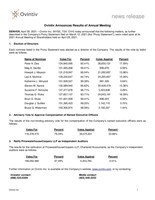 Each nominee listed in the Proxy Statement was elected as a director of the Company. The results of the vote by ballot were as follows:

The results of the non-binding advisory vote for the compensation of the Company's named executive officers were as follows:

The results for the ratification of PricewaterhouseCoopers LLP, Chartered Accountants, as the Company's independent auditors were as follows: