DENVER, March 24, 2021 /CNW/ - Ovintiv Inc. (NYSE: OVV) (TSX: OVV) today announced the signing of an agreement to sell its Eagle Ford assets to Validus Energy for $880 million. With this sale, the Company has exceeded its divesture target and, with other items, now anticipates year-end 2021 debt to be below $5 billion using its 2021 planning price deck of $50 WTI oil and $2.75 NYMEX gas. In addition, the Company expects to achieve its $4.5 billion debt target in the first half of 2022. Guidance was also updated to reflect the impact from first quarter winter storms and recent divestitures. Accompanying slides can be found on the Company's website at www.ovintiv.com. 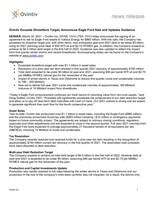 "Today's Eagle Ford announcement continues our track record of unlocking value from non-core assets," said Doug Suttles, Ovintiv CEO. "Proceeds will significantly accelerate the achievement of our debt reduction target and allow us to pay off near-term debt maturities with cash on hand. Our 2021 outlook is strong and we expect to generate significant free cash flow for the fourth consecutive year."

Asset Sales
Year-to-date, Ovintiv has announced over $1.1 billion in asset sales, including the Eagle Ford ($880 million) and the previously announced Duvernay sale ($263 million including ~$12 million in contingency payments based on future commodity prices). The agreements are subject to ordinary closing conditions, regulatory approvals and other adjustments and are expected to close in the second quarter. Full year 2021 volumes from the Eagle Ford were expected to average approximately 21 thousand barrels of oil equivalent per day (MBOE/d), including 14 Mbbls/d of crude and condensate.

Tax Resolution
The Company recently resolved and received funds for a prior-year tax item resulting in the recognition of approximately $150 million current tax recovery in the first quarter of 2021. The associated cash proceeds have been allocated to debt reduction.

Multi-year Debt Reduction Target
The Company expects to achieve its total debt target of $4.5 billion in the first half of 2022. Absolute debt at year-end 2021 is expected to be under $5 billion, assuming $50 per barrel WTI oil and $2.75 per MMBtu NYMEX natural gas for the remainder of the year.

Production and Capital Investments Update
Production was rapidly restored to full rates following the winter storms in Texas and Oklahoma and our production in the rest of the company's multi-basin portfolio was not impacted. As a result, the storms only impacted the first quarter. Crude and condensate volumes in the first quarter are now expected to average 196 – 200 Mbbls/d. March 2021 production is expected to average more than 205 Mbbls/d.

Based on anticipated closing dates for divestitures in the second quarter, the Company expects its full-year 2021 crude and condensate production to now average approximately 190 Mbbls/d, inclusive of about 10 Mbbls/d from divested assets. Planned capital investments for 2021 remain unchanged at approximately $1.5 billion. The impact to per unit total cost per BOE is expected to be minimal.

ADVISORY REGARDING FORWARD-LOOKING STATEMENTS – This news release contains certain forward-looking statements or information (collectively, "FLS") within the meaning of applicable securities legislation, including the United States Private Securities Litigation Reform Act of 1995. FLS include: expected consideration from asset sales, including anticipated contingent payments, and use of proceeds therefrom; expectation that closing conditions and regulatory approvals will be satisfied and timing of closings; targeted debt reduction and timing thereof, 2021 outlook, including expected capital investments, reinvestment rate, production and free cash flow. FLS involve assumptions, risks and uncertainties that may cause such statements not to occur or results to differ materially. These assumptions include expectations and projections made in light of the Company's historical experience. Risks and uncertainties include: commodity price volatility and impact to the Company's stock price and cash flows; ability to secure adequate transportation and potential curtailments of refinery operations, including resulting storage constraints or widening price differentials; business interruption, property and casualty losses or unexpected technical difficulties; impact of COVID-19 to the Company's operations, including maintaining ordinary staffing levels, securing operational inputs, executing on portions of its business and cyber-security risks associated with remote work; counterparty and credit risk; impact of changes in credit rating and access to liquidity, including costs thereof; risks in marketing operations; risks associated with technology; and other risks and uncertainties as described in the Company's Annual Report on Form 10-K, Quarterly Report on Form 10-Q and as described from time to time in its other periodic filings as filed on EDGAR and SEDAR. Although the Company believes such FLS are reasonable, there can be no assurance they will prove to be correct. The above assumptions, risks and uncertainties are not exhaustive. FLS are made as of the date hereof and, except as required by law, the Company undertakes no obligation to update or revise any FLS.