Ovintiv Appoints Katherine L. Minyard to Board of Directors

DENVER, March 4, 2021 /CNW/ - Ovintiv Inc. (NYSE: OVV) (TSX: OVV) today announced that Katherine L. Minyard has been appointed as an independent member of its board of directors, effective immediately. 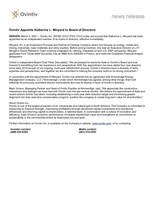 Minyard, 45, is an Investment Principal and Partner at Cambiar Investors where she focuses on energy, metals and mining, industrials, basic materials and utility equities. Before joining Cambiar, she was an Executive Director on J.P. Morgan's Equity Research Team covering integrated oil, refining, Canadian oil and U.S. E&P companies. Minyard graduated from Texas A&M University, has an MBA from INSEAD in France, and holds the Chartered Financial Analyst designation.

Ovintiv's independent Board Chair Peter Dea stated, "We are pleased to welcome Kate to Ovintiv's Board and look forward to benefitting from her experience and perspectives. With this appointment, we have added four new directors since early 2019 as part of our ongoing, multi-year refreshment process. Ovintiv's directors have a diversity of skills, expertise and perspectives, and together we are committed to helping the company build on its strong momentum."

In connection with the appointment of Minyard, Ovintiv has entered into an agreement with Kimmeridge Energy Management Company, LLC ("Kimmeridge") under which Kimmeridge has agreed, among other things, that it will withdraw its previously submitted director nominations and vote its shares in favor of Ovintiv's directors.

Mark Viviano, Managing Partner and Head of Public Equities at Kimmeridge, said, "We appreciate the constructive interactions and dialogue we have had with Ovintiv over the last several months. We believe the appointment of Kate and recent actions Ovintiv has taken, including establishing a multi-year debt reduction target and introducing greater alignment into their executive compensation program, position the company to create long-term value for shareholders."