No change to net acreage, production, proved reserves or 2020-21 scenarios

DENVER, Sept. 1, 2020 /CNW/ - Ovintiv Inc. (NYSE: OVV) (TSX: OVV) today announced that its subsidiary, Ovintiv Canada ULC, has closed an agreement with PetroChina Canada Ltd. (PCC) to terminate the parties' joint venture and transfer the ownership and operation of certain Duvernay shale assets in west-central Alberta. Ovintiv and PCC have agreed to partition the Duvernay acreage and associated infrastructure as each company will independently own and operate their interests going forward. There were no penalties or fees associated with this transaction. 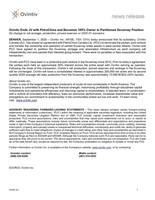 Ovintiv and PCC have been in a productive joint venture in the Duvernay since 2012. Prior to today's agreement, the parties each held an approximate 50% interest across the entire asset with Ovintiv serving as operator. Following the close of this transaction, Ovintiv's net production, proved reserves and acreage in the Duvernay will be unchanged. Ovintiv will have a consolidated interest in approximately 250,000 net acres and its second quarter 2020 average net daily production from the Duvernay was approximately 13,000 BOE/d (43% liquids).

About Ovintiv Inc.
Ovintiv is one of the largest independent producers of crude oil and condensate in North America. The Company is committed to preserving its financial strength, maximizing profitability through disciplined capital investments and operational efficiencies and returning capital to shareholders. A talented team, in combination with a culture of innovation and efficiency, fuels our economic performance, increases shareholder value and strengthens our commitment to sustainability in the communities where we live and work. To learn more, visit:  www.ovintiv.com

ADVISORY REGARDING FORWARD-LOOKING STATEMENTS – This news release contains certain forward-looking statements or information (collectively, "FLS") within the meaning of applicable securities legislation, including the United States Private Securities Litigation Reform Act of 1995. FLS include: capital investment scenarios and associated production. FLS involve assumptions, risks and uncertainties that may cause such statements not to occur or results to differ materially. These assumptions include: future commodity prices and differentials and expectations and projections made in light of the Company's historical experience. Risks and uncertainties include: commodity price volatility; business interruption, property and casualty losses or unexpected technical difficulties; counterparty and credit risk; ability to generate sufficient cash flow to meet obligations; impact of changes in credit rating; and other risks and uncertainties as described in the Company's Annual Report on Form 10-K, Quarterly Report on Form 10-Q and as described from time to time in its other periodic filings as filed on EDGAR and SEDAR. Although the Company believes such FLS are reasonable, there can be no assurance they will prove to be correct. The above assumptions, risks and uncertainties are not exhaustive. FLS are made as of the date hereof and, except as required by law, the Company undertakes no obligation to update or revise any FLS.