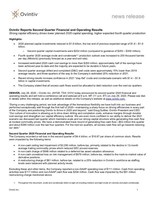 "During a very challenging period, we took advantage of the tremendous flexibility we have built into our business and performed exceptionally well through the first half of 2020—maintaining a sharp focus on driving efficiencies in every part of the Company and positioning Ovintiv to thrive in 2020 and beyond," said Doug Suttles, Ovintiv President and CEO. "Our culture of innovation is allowing us to drive down drilling and completion costs, enhance margins through durable cost savings and strengthen our capital efficiency outlook. We are even more confident in our ability to deliver the 2021 scenario we discussed last quarter which maintains scale and our strong capital structure while generating free cash flow at modest commodity prices. We have a demonstrated track record of generating free cash flow—$52 million this quarter and about $290 million over the last four quarters. For the next six quarters, all excess cash flows will go towards reducing our debt."

The Company recorded a net loss in the second quarter of $4.4 billion, or $16.87 per share of common stock. Results were impacted by the following items:

Ovintiv delivered higher than expected production during the quarter and continued to show significant reductions in costs. Capital investment levels were below the mid-point of the Company's previous guidance.

2020 and 2021 Scenario
Recent operating results have helped confirm key financial and operating assumptions behind the future "scenarios" the Company outlined in May 2020.

Strong Hedge Position Protects Cash Flow
Ovintiv is substantially hedged on near-term, benchmark oil price risk. For the third quarter, 175 Mbbls/d are hedged at an average price of $45.06 per barrel. Of these positions, 160 Mbbls/d are in fixed price swaps at $44.60 per barrel and 15 Mbbls/d are covered by costless collars between $50.00 and $68.71 per barrel. "Benchmark" refers to NYMEX WTI. Natural gas hedges are also in place on approximately 1.4 billion cubic feet per day of production hedged at an average price of $2.53 per thousand cubic feet (Mcf).

Based on the forward strip as of June 30, third quarter realized risk management gains on benchmark oil and natural gas are expected to total approximately $180 million, and total $406 million for the balance-of-year-2020. Settlements for various other oil differential and natural gas basis positions in 2020 serve to further reduce risk. See the Hedge Volume and Hedging Price Sensitivity tables below.

During the first half of the year, Ovintiv repurchased approximately $137 million in principal amount of its senior notes in the open market for an aggregate cash payment of approximately $115 million, plus accrued interest. The Company has significant flexibility to manage the late 2021 and 2022 maturities, including the use of its credit facilities.

Approximately 80% of the Company's total fixed-rate long-term debt is due in 2024 or later and has an aggregate weighted average bond maturity of approximately nine years.

Asset Highlights
The Company set new, record-low well drilling and completion costs in each of its Core 3 asset areas during the second quarter. A chart comparing previous well costs by area to current estimates is included in today's accompanying presentation on the website.

Permian
Permian production averaged 111 MBOE/d (81% liquids) in the quarter. The Company averaged four rigs, down from five in the first quarter of 2020. During the quarter, 23 net wells were drilled, and 13 net wells were turned in line (TIL). Ovintiv is currently running three rigs in the play.

The Company continues to advance Simul-Frac learnings in the Permian, leading to increased completion rates and lower cycle times over the quarter. These increased efficiencies resulted in a 19% improvement in the second quarter D&C well costs compared to 2019 average well costs.

Anadarko
Anadarko production averaged 144 MBOE/d (61% liquids) in the quarter. The Company averaged three rigs, down from six in the first quarter of 2020. During the second quarter, 13 net wells were drilled, and 17 net wells were TIL. Ovintiv is currently running two rigs in the play.

14 STACK wells in 2020 have been drilled and completed for less than $5 million. The pacesetter D&C well cost is now $4.4 million representing a 30% reduction from 2019 average results.

The Company achieved a record completion rate on a recent four-well pad in Pipestone of 3,450 feet per day, a 45% improvement compared to the 2019 average. First half 2020 D&C well costs averaged $480 per foot in Pipestone, representing a 14% improvement over 2019 average costs.

Base Assets
Base assets in the portfolio include the Eagle Ford, Bakken, Uinta and Duvernay. There were no wells TIL in these areas during the second quarter.

For additional information, please refer to the 2Q 2020 Results Presentation at https://investor.ovintiv.com/presentations-events.

Conference Call Information
A conference call and webcast to discuss the Company's second quarter results will be held at 9 a.m. MT (11 a.m. ET) on July 29, 2020. To participate in the call, please dial 888-664-6383 (toll-free in North America) or 416-764-8650 (international) approximately 15 minutes prior to the conference call. The live audio webcast of the conference call, including slides and financial statements, will be available on Ovintiv's website, www.ovintiv.com under Investors/Presentations and Events. The webcast will be archived for approximately 90 days.

Important information
Ovintiv reports in U.S. dollars unless otherwise noted. Production, sales and reserves estimates are reported on an after-royalties basis, unless otherwise noted. The term liquids is used to represent oil and NGLs. The term liquids-rich is used to represent natural gas streams with associated liquids volumes. Unless otherwise specified or the context otherwise requires, references to Ovintiv or to the Company includes reference to subsidiaries of and partnership interests held by Ovintiv Inc. and its subsidiaries.

ADVISORY REGARDING OIL AND GAS INFORMATION – The conversion of natural gas volumes to barrels of oil equivalent (BOE) is on the basis of six thousand cubic feet to one barrel. BOE is based on a generic energy equivalency conversion method primarily applicable at the burner tip and does not represent economic value equivalency at the wellhead. Readers are cautioned that BOE may be misleading, particularly if used in isolation.

ADVISORY REGARDING FORWARD-LOOKING STATEMENTS – This news release contains certain forward-looking statements or information (collectively, "FLS") within the meaning of applicable securities legislation, including the United States Private Securities Litigation Reform Act of 1995. FLS include: anticipated cost savings, capital efficiency and sustainability thereof; estimated hedging revenue and sensitivity to commodity prices; shut-in strategy; production, total cash costs and capital investments versus expectations; capital investment scenarios and associated production; anticipated cash flow; statements regarding the Company's application of excess cash flow to reduce debt; operational flexibility, legacy costs, future well costs, service cost savings and efficiency gains; anticipated success of and benefits from technology and innovation; expected rigs and locations thereof; expected activity and investment levels; expected drilling and completions activity and the timing thereof; fourth quarter production outlook and ability to make adjustments as conditions dictate; use of the Company's credit facilities and ability to manage near-term maturities; financial flexibility and ability to respond to evolving market conditions; and pacesetting metrics being indicative of future well performance. FLS involve assumptions, risks and uncertainties that may cause such statements not to occur or results to differ materially. These assumptions include: future commodity prices and differentials; assumptions contained herein; data contained in key modeling statistics; availability of attractive hedges and enforceability of risk management program; and expectations and projections made in light of the Company's historical experience. Risks and uncertainties include: suspension of or changes to guidance, and associated impact to production; ability to generate sufficient cash flow to meet obligations; commodity price volatility and impact to the Company's stock price and cash flows; ability to secure adequate transportation and potential curtailments of refinery operations, including resulting storage constraints or widening price differentials; discretion to declare and pay dividends, if any; business interruption, property and casualty losses or unexpected technical difficulties; impact of COVID-19 to the Company's operations, including maintaining ordinary staffing levels, securing operational inputs, executing on portions of its business and cyber-security risks associated with remote work; counterparty and credit risk; impact of changes in credit rating and access to liquidity, including costs thereof; risks in marketing operations; risks associated with technology; risks associated with decommissioning activities, including timing and costs thereof; and other risks and uncertainties as described in the Company's Annual Report on Form 10- K, Quarterly Report on Form 10-Q and as described from time to time in its other periodic filings as filed on EDGAR and SEDAR. Although the Company believes such FLS are reasonable, there can be no assurance they will prove to be correct. The above assumptions, risks and uncertainties are not exhaustive. FLS are made as of the date hereof and, except as required by law, the Company undertakes no obligation to update or revise any FLS.