President Michael McAllister to retire after 20 years with the Company

DENVER, May 27, 2020 /CNW/ - Ovintiv Inc. (NYSE, TSX: OVV) today announced that Peter A. Dea will succeed Clayton H. Woitas, 71, as its chairman of the board. Ovintiv President Michael McAllister also announced plans to retire after 20 years with the Company and nearly 40 years in the industry. Both changes are effective June 30, 2020. 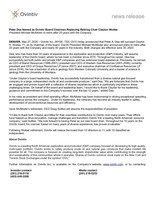 Dea, who has more than 30 years of experience in the exploration and production (E&P) industry, will assume leadership of the Ovintiv board, where he has been a member since 2010. Throughout his career, Dea has successfully led both public and private E&P companies and has extensive board experience. Previously, he served as CEO of Barret Resources (1999-2001); president and CEO of Western Gas Resources (2001-2006); currently president and CEO of Cirque Resources LP (since 2007); and executive chairman of Confluence Resources LP (since 2016). He has a bachelor of arts in geology from Western Colorado University and a master of science in geology from the University of Montana.

"Under Clayton's board leadership, Ovintiv has successfully transitioned from a diverse natural gas-focused company to a large, independent crude oil and condensate producer," said Dea. "We are fortunate that Ovintiv has an engaged and proven board with a collection of diverse experiences which is particularly important in these challenging times. On behalf of the board and leadership team, I would like to thank Clayton for his leadership, guidance and commitment to the Company's success over the last 12 years," added Dea.

In his roles as president and chief operating officer, McAllister has been instrumental in driving exceptional operating performance across the company.  Under his leadership, the company has become an industry leader in safety, development of unconventional resources and efficiency.

Upon McAllister's retirement, CEO Doug Suttles will assume the responsibilities of president.

"I'd like to thank both Clayton and Mike for their countless contributions to Ovintiv over many years. Their efforts have helped us drive innovation, manage challenges and transform Ovintiv into a leading North American resource company," said Suttles. "We look forward to having Peter as our new board chair. Throughout his 10 years on the Ovintiv board, his counsel, based on many years of diverse experience, has proven invaluable."

Following Woitas' retirement, Ovintiv will reduce the board from 12 directors to 11, with 10 classified as independent.

Ovintiv is a leading North American exploration and production (E&P) company focused on developing its high-quality, multi-basin portfolio. Ovintiv works to safely produce crude oil and natural gas—products that make modern life possible for all. The company is focused on creating long-term shareholder value while contributing to the strength and sustainability of the communities where it operates. Shares of Ovintiv common stock trade on the New York and Toronto Stock Exchanges under the symbol "OVV."