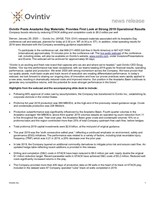 "Ovintiv is an exciting and fresh new brand that captures who we are and where we're headed," said Ovintiv CEO Doug Suttles. "Our top-line performance has been exceptional, with our teams beating 2019 goals for financial results, operating performance, capital and production. We enter 2020 with strong momentum across the Company. We have proven that our quality assets, multi-basin scale and track record of execution are creating differentiated performance. In today's webcast, we look forward to sharing our ongoing story of innovation and how our proven practices were rapidly applied to a new area, resulting in dramatically reduced costs and improved returns. Our position in the Anadarko Basin continues to generate very competitive returns, with the potential for even stronger performance in the future."

Highlights from the webcast and the accompanying slide deck to include:

NOTE 2: TRIF is a measure of safe operations and is defined as the number of recordable injuries x 200,000 divided by exposure hours. 2018 TRIF of 0.28 represents Encana Corporation only. 2019 is proforma for Encana and Newfield combined operations.

ADVISORY REGARDING OIL AND GAS INFORMATION – The conversion of natural gas volumes to barrels of oil equivalent (BOE) is on the basis of six thousand cubic feet to one barrel. BOE is based on a generic energy equivalency conversion method primarily applicable at the burner tip and does not represent economic value equivalency at the wellhead. Readers are cautioned that BOE may be misleading, particularly if used in isolation. EUR is presented as it is the most relevant specific assignable category of estimated resources. However, there is no certainty that any portion of the resources will be discovered or that it will be commercially viable to produce any portion of the estimated EUR.

ADVISORY REGARDING FORWARD-LOOKING STATEMENTS – This news release contains forward-looking statements or information (collectively, "FLS") within the meaning of applicable securities legislation, including Section 27A of the Securities Act of 1933, as amended, and Section 21E of the Securities Exchange Act of 1934, as amended. FLS include: meeting capital outlook, returns, free cash flow, production and liquids growth targets, and repeatable performance in future years; quality of asset portfolio; estimated G&A and operating cost synergies and additional savings in well costs; ability to generate free cash flow; ability to lower costs and improve efficiencies to deliver competitive returns; benefits of cube development; and outcomes of risk management program. FLS involve assumptions, risks and uncertainties that may cause such statements not to occur or results to differ materially. These assumptions include: future commodity prices and differentials; data contained in key modeling statistics; availability of attractive hedges and enforceability of risk management program; access to transportation and processing facilities; and expectations and projections made in light of Ovintiv's historical experience and its perception of historical trends. Risks and uncertainties include: ability to generate sufficient cash flow to meet obligations; commodity price volatility; ability to secure adequate transportation and potential pipeline curtailments; timing and costs of well, facilities and pipeline construction; business interruption, property and casualty losses or unexpected technical difficulties; counterparty and credit risk; impact of changes in credit rating and access to liquidity, including ability to issue commercial paper; currency and interest rates; risks inherent in Ovintiv's corporate guidance; failure to achieve cost and efficiency initiatives; risks in marketing operations; risks associated with technology; changes in or interpretation of laws or regulations; risks associated with existing or potential lawsuits and regulatory actions; impact of disputes arising with partners, including suspension of certain obligations and inability to dispose of assets or interests in certain arrangements; ability to acquire or find additional reserves; imprecision of reserves estimates and estimates of recoverable quantities; and other risks and uncertainties as described in Ovintiv's Annual Report on Form 10-K and Quarterly Report on Form 10-Q and as described from time to time in Ovintiv's other periodic filings as filed on SEDAR and EDGAR.

Although Ovintiv believes such FLS are reasonable, there can be no assurance they will prove to be correct. The above assumptions, risks and uncertainties are not exhaustive. FLS are made as of the date hereof and, except as required by law, Ovintiv undertakes no obligation to update or revise any FLS.

Further information on Ovintiv Inc. is available on the company's website, www.ovintiv.com, or by contacting: