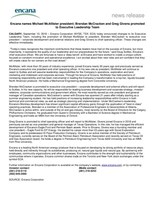 "Today's news recognizes the important contributions that these leaders have had on the success of Encana, but more importantly, it represents the quality of our leadership and our preparedness for the future," said Doug Suttles, Encana's chief executive officer. We are fortunate to have a 'deep bench' at Encana and have worked to create a unique culture focused on constant innovation and operational excellence. I am excited about their new roles and am confident that they will create value for our owners on the road ahead."

McAllister, with more than 30 years of industry experience, joined Encana nearly 20 years ago and previously served as Encana's executive vice president and chief operating officer. In his new role as president, McAllister will continue to report to Suttles and will assume leadership responsibilities for the Company's operations, exploration and land, marketing and midstream and corporate services. Through his tenure at Encana, McAllister has held positions of increasing responsibility and has been instrumental in leading the Company's transformation to a top-tier, liquids-focused North American producer. He holds a Mechanical Engineering degree from Concordia University.

Brendan McCracken is promoted to executive vice president – corporate development and external affairs and will report to Suttles. In his new capacity, he will be responsible for leading business development and corporate strategy, investor relations, corporate communications and government affairs. He most recently served as vice president and general manager of Canadian operations. McCracken's career with Encana has spanned 21 years after initially starting as a summer engineering student. He has held positions of increasing leadership responsibilities within Encana in both technical and commercial roles, as well as strategic planning and implementation. Under McCracken's leadership, Encana's Montney development has shown significant capital efficiency gains through the application of "best-in-class" operating practices. Brendan is a member of the Association of Professional Engineers & Geoscientists of Alberta. McCracken is active within, and outside of the oil and gas industry, most recently on the Board of Directors for the Calgary Philharmonic Orchestra. He graduated from Queen's University with a Bachelor of Science degree in Mechanical Engineering and holds an MBA from the University of Oxford.

Greg Givens is promoted to chief operating officer and will report to McAllister. Givens joined Encana in 2018 and previously served as vice president and general manager of Texas Operations. In this role, he has managed the efficient development of Encana's Eagle Ford and Permian Basin assets. Prior to Encana, Givens was a founding member and vice president – Eagle Ford for EP Energy. He started his career more than 23 years ago with Sonat Exploration Company and its predecessor El Paso Production Company. Givens is an active member of the Society of Petroleum Engineers, currently serves on the Board of the Permian Basin Petroleum Association and recently served on Texas Oil and Gas Association board. He holds a degree in Petroleum Engineering from Texas A&M University and has an MBA from Rice University.

Encana is a leading North American energy producer that is focused on developing its strong portfolio of resource plays, held directly and indirectly through its subsidiaries, producing oil, natural gas liquids and natural gas. By partnering with employees, community organizations and other businesses, Encana contributes to the strength and sustainability of the communities where it operates. Encana common shares trade on the Toronto and New York stock exchanges under the symbol ECA.

Further information on Encana Corporation is available on the company's website, www.encana.com, or by contacting: