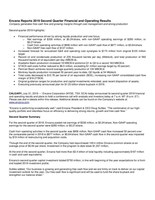 Through the end of the second quarter, the Company had repurchased 149.4 million Encana common shares at an average price of $6.94 per share. Investment in the program to date totals $1,037 million.

At the end of the second quarter, Encana had more than $3.4 billion of total liquidity including approximately $167 million in cash and cash equivalents.

Suttles added, "Our business is growing and generating free cash flow and we are firmly on track to deliver on our capital investment outlook for this year. Our free cash flow is significant and will be used to fund the share buyback and strengthen our balance sheet."

Importantly, Encana continued to enhance returns in STACK through additional reductions in completed well costs. Since closing the acquisition of Newfield in mid-February, well costs have been reduced by $1.4 million to $6.5 million (pre-Encana 2018 average was $7.9 million). Eighty-nine gross STACK wells in the Meramec completed year to date are tracking type curve including 18 gross cube-style wells that are showing strong oil productivity.

For more detailed information on the Company's assets and second quarter results, please refer to the Corporate Presentation at https://www.encana.com/investors/.

Conference Call Information
A conference call and webcast to discuss the 2019 second quarter financial and operating results will be held today at 7 a.m. MT (9 a.m. ET). To participate, please dial 888-231-8191 (toll-free in North America) or 647-427-7450 (international) approximately 10 minutes prior to the conference call. The live audio webcast of the conference call, including slides, will also be available on Encana's website, www.encana.com, under Investors/Presentations & Events. The webcast will be archived for approximately 90 days.

Certain measures in this news release do not have any standardized meaning as prescribed by U.S. GAAP and, therefore, are considered non-GAAP measures. These measures may not be comparable to similar measures presented by other companies and should not be viewed as a substitute for measures reported under U.S. GAAP. These measures are commonly used in the oil and gas industry and/or by Encana to provide shareholders and potential investors with additional information regarding the Company's liquidity and its ability to generate funds to finance its operations. For additional information regarding non-GAAP measures, see the Company's website. This news release contains references to non-GAAP measures as follows:

ADVISORY REGARDING OIL AND GAS INFORMATION - The conversion of natural gas volumes to barrels of oil equivalent (BOE) is on the basis of six thousand cubic feet to one barrel. BOE is based on a generic energy equivalency conversion method primarily applicable at the burner tip and does not represent economic value equivalency at the wellhead. Readers are cautioned that BOE may be misleading, particularly if used in isolation.

ADVISORY REGARDING FORWARD-LOOKING STATEMENTS – This news release contains forward-looking statements or information (collectively, "FLS") within the meaning of applicable securities legislation, including Section 27A of the Securities Act of 1933, as amended, and Section 21E of the Securities Exchange Act of 1934, as amended. FLS include: meeting Encana's annual guidance, including capital outlook, returns, free cash flow, production targets and liquids growth, and repeatable performance in future years; quality of asset portfolio and commitment to delivering shareholder value; estimated G&A synergies and additional savings in well costs; ability to generate free cash flow and amount and use thereof; amount and timing of share buyback; benefits of cube development; portfolio refinement and timing of closing thereof; and outcomes of risk management program. FLS involve assumptions, risks and uncertainties that may cause such statements not to occur or results to differ materially. These assumptions include: future commodity prices and differentials; assumptions in corporate guidance; data contained in key modeling statistics; availability of attractive hedges and enforceability of risk management program; access to transportation and processing facilities; and expectations and projections made in light of Encana's historical experience and its perception of historical trends. Risks and uncertainties include: integration of Newfield's business and ability to achieve anticipated benefits; ability to generate sufficient cash flow to meet obligations; commodity price volatility; ability to secure adequate transportation and potential pipeline curtailments; variability and discretion to declare and pay dividends, if any; amount and timing of share repurchases; timing and costs of well, facilities and pipeline construction; business interruption, property and casualty losses or unexpected technical difficulties; counterparty and credit risk; impact of changes in credit rating and access to liquidity, including ability to issue commercial paper; currency and interest rates; risks inherent in Encana's corporate guidance; failure to achieve cost and efficiency initiatives; risks in marketing operations; risks associated with technology; changes in or interpretation of laws or regulations; risks associated with existing or potential lawsuits and regulatory actions; impact of disputes arising with partners, including suspension of certain obligations and inability to dispose of assets or interests in certain arrangements; ability to acquire or find additional reserves; imprecision of reserves estimates and estimates of recoverable quantities; and other risks and uncertainties as described in Encana's Annual Report on Form 10-K and Quarterly Report on Form 10-Q and as described from time to time in Encana's other periodic filings as filed on SEDAR and EDGAR.

Although Encana believes such FLS are reasonable, there can be no assurance they will prove to be correct. The above assumptions, risks and uncertainties are not exhaustive. FLS are made as of the date hereof and, except as required by law, Encana undertakes no obligation to update or revise any FLS.

Further information on Encana Corporation is available on the company's website, www.encana.com, or by contacting: